Barry Lewtas believes the consistency and technical quality of Leighton Clarkson is behind the youngster’s recent call-up to the Liverpool senior side.The Reds’ under-18 midfielder was a surprise addition to Jurgen Klopp’s first team for last week’s Carabao Cup win over MK Dons.Clarkson, along with fellow 18-year-old Luis Longstaff, was an unused substitute against the League One side having trained with the European champions at Melwood in the days leading up to the game. Article continues below Editors’ Picks Ox-rated! Dream night in Genk for Liverpool ace after injury nightmare Messi a man for all Champions League seasons – but will this really be Barcelona’s? Are Chelsea this season’s Ajax? Super-subs Batshuayi & Pulisic show Blues can dare to dream Time for another transfer? Giroud’s Chelsea spell set to end like his Arsenal career The Clitheroe-born teenager, who joined Liverpool aged eight, has impressed for Lewtas’ side so far this season, and is likely to start for the under-19s as they continue their UEFA Youth League campaign against Salzburg at St Helens on Wednesday afternoon.And Lewtas says Clarkson, a member of his FA Youth Cup winning squad last season, deserves plenty of praise for the way he has developed over the past 12 months.“It [his call-up] could be a mixture of a number of things really,” the Reds under 18 coach said. “Leighton has been consistently good for a season and has carried it on this year. “He is technically a good player, which always helps when you are stepping up to that environment where the level is extremely high as it helps you survive.“The communication between Alex [Inglethorpe, Liverpool’s Academy director] at Melwood and the pathway from the Academy is there, they are watching games and seeing consistent performances from Leighton and how he conducts himself and how professional he is, and they’ve seen enough to get him up there. “Once he’s up there, it’s up to him. And obviously he’s done okay.“He will train there in morning and he’ll come back here and he’s in the gym with the lads in the afternoon, it’s not like they go there and that’s it. They still do their work at the Academy as well. They are probably desperate to come back and tell everyone stories to be honest!”Lewtas’ side began their Youth League campaign with a hard-fought 1-1 draw in Napoli last month, with 16-year-old Layton Stewart grabbing a late equaliser.They will be strong favourites for tonight’s game, and will again be able to call upon the likes of Curtis Jones, Harvey Elliott, Ki-Jana Hoever and Sepp van den Berg, all of whom featured for the senior side at MK Dons.Jones is likely to captain the team, and Lewtas says that, like James Milner, he has been encouraged by the way in which the young Scouser has stepped up his game of late. 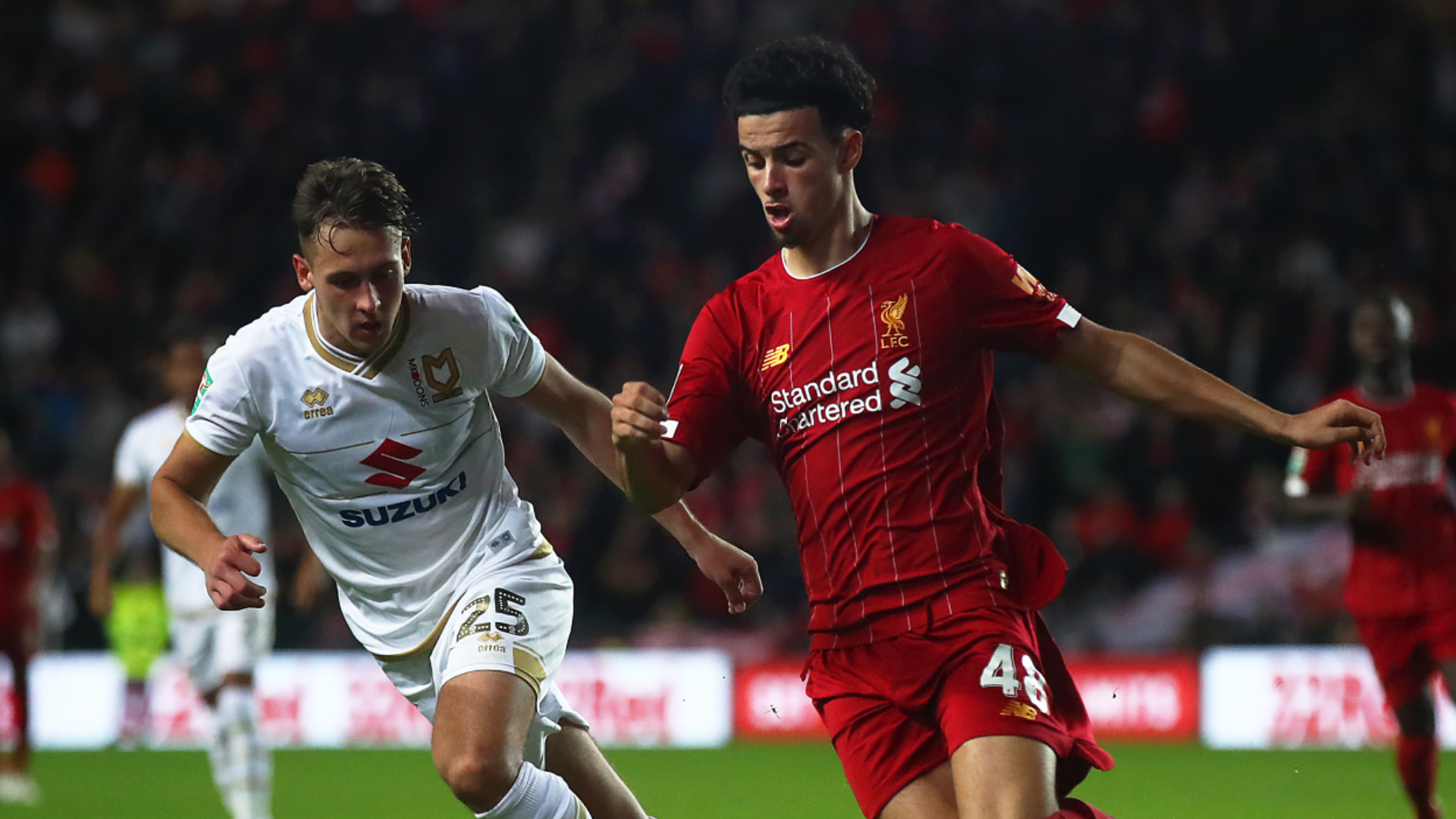 “Inside the Academy we have to realise that sometimes young lads do makes mistakes and have to learn from them,” he said. “In this environment you have to learn quickly.“Curtis was captain in Naples and I was impressed by how mature and responsible he was, not just on the pitch but around the place. He was a leader when we were there.“If the senior professionals, like Milner, have noticed a change, then that’s really good. That’s part of growing up.“His form for Critch [under-23s boss Neil Critchley] has been a positive. The standard of players, especially the attacking ones at Melwood, surely has to serve as motivation, not just for Curtis but for all the youngsters.“We are in a fortunate position where the group is so close-knit. Curtis plays for the first team, gets man of the match, then a few days later scores twice for the U23s.“He’ll be desperate to play on Wednesday. Fantastic week for him, it’s only good for his development.”On Elliott, whose performance against MK Dons was eye-catching, he added: “Harvey is in here quite a bit. He’s a nice kid. “You sometimes forget he is only 16, he’s a young boy. He’s polite and seems a nice kid. But when he plays, he seems to have a real maturity and confidence in his performance.”Liverpool under-19s take on Salzburg in the UEFA Youth League on Wednesday October 2, kick-off 3pm. The game will be played at the Totally Wicked Stadium, St Helens. Tickets will be available on the gate, priced £3/£1 concessions. Subscribe to Goal’s Liverpool Correspondent Neil Jones’ weekly email bringing you the best Liverpool FC writing from around the web